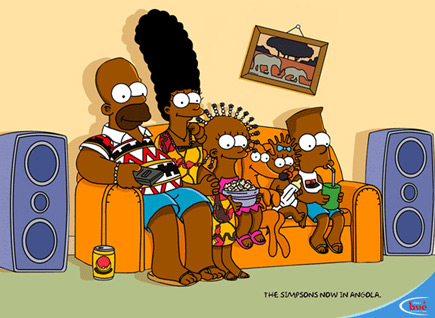 America’s most well known animated family, The Simpsons get an African makeover that raises some eyebrows.

For the first time in more than two decades, Homer and his family have been given a make-over.

The family have been turned into Angolans ahead of the shows first airing in the African continent.

Angolan advertising agency Executive Center have taken an original animated promotional shot of Bart, Homer, Maggie Lisa and Marge sitting together on a couch and altered it to show them as Africans.

Their yellow skin has been replaced with a much darker brown skin while Marge’s blue hair has been switched for a jet black afro hairdo. Lisa’s hair is now braided and the entire family are shown wearing Angolan-inspired clothing and flip flops.

The family cat has completely disappeared from the new shot. Also missing are a lamp, table and telephone which have been replaced by huge stereo speakers.

And the picture on the wall of a yacht on the ocean is now a picture of Serengeti elephant scene.

Underneath the family are the words: ‘The Simpsons now in Angola.’

Some raised concern about the “African” Simpsons being too stereotypical.  What is your take?

Previous: African Beauties Represent at Miss Universe 2009
Next: Caster Semenya Gets Glamed Up