Home / Magazine / Health / ‘We Have No Plan B, We Have to Get Rid of This Virus’ 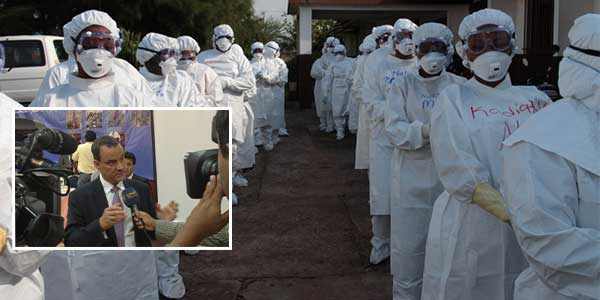 The newly appointed Special Representative of the Secretary-General, Ismail Ould Cheikh Ahmed, arrived this morning in Accra, Ghana, where he officially begins his duties next week as head of the United Nations Mission for Ebola Emergency Response (UNMEER).

Mr. Ould Cheikh Ahmed will be taking over for Mr. Anthony Banbury.  Speaking with UNMEER staff at a town hall meeting today, Mr. Ould Cheikh Ahmed praised their achievements but also noted the challenges in battling the deadly outbreak. “This is a global crisis. We definitely have a difficult time ahead of us, but we can achieve it,” Mr. Ould Cheikh Ahmed said. “We have no plan B, we have to get rid of this virus. This is within our reach, but we should not be complacent.”

According to the latest World Health Organization (WHO) figures, there are 20,206 confirmed, probable or suspected cases of Ebola and 7,905 reported deaths. “We need to keep going until we don’t have even one case, because even one case is too many,” he said. “The work ahead remains very hard but we really have no other choice.”

Outgoing Head Anthony Banbury welcomed Ismail Ould Cheikh Ahmed, saying, “Even while we face a lot of hard work in the days, weeks and months ahead, it’s important to pause and think back to where we were when we started. There were predictions that there would be 1.4 million cases by now.” Ould Cheikh Ahmed will be visiting Liberia and Sierra Leone next week, then Guinea shortly after, to reinforce UNMEER’s strategic priorities and see first-hand the Ebola response. He will be accompanied by UN Special Envoy on Ebola, Dr. David Nabarro.

According to UNMEER, the three affected countries now have sufficient capacity to isolate and treat 100 percent of confirmed Ebola patients and enough burial teams to ensure safe and dignified burials for 100 percent of all deaths due to Ebola.  Before his new appointment, Ould Cheikh Ahmed served as Deputy Special Representative and Deputy Head of the UN Support Mission in Libya (UNSMIL).

Previous: 2Face Idibia Release his greatest album – The Ascension
Next: Half of Yellow Sun African turned in a film