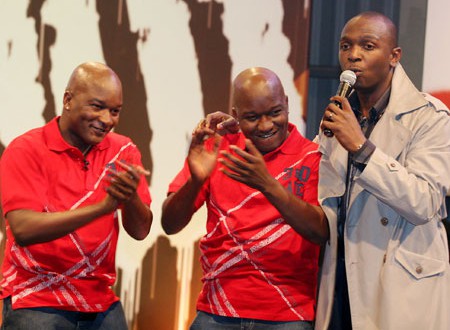 Big Brother Africa is back with more twists and turns and DOUBLE the prize money.

Africa knows how to start a show!  The new season of Big Brother Revolution kicked off with dancers who did a lot of summersaults on stage. Host IK arrived at the show via helicopter upping the WOW factor. Housemates arrived on bikes. Somali-Canadian rapper K’Naan performed as flags from all 14 countries were moved around.  Viewers waited with bated breath, expecting the housemates to be the usual mix of half male and half female, but Big Brother pulled one over on the male housemates by announcing that there were no female housemates. The twist is that the women would arrive next week.

The other big twist is that twins from Namibia will play the game as one person.  This has already been done in Big Brother USA but it will be interesting to see how it plays out in the Africa version.

Itai Makumbe is from Zimbabwe and is 31 years old getting his Masters degree with high hopes of working in Civil Society when he completes his Degree. When he wins the money he wants to visit his Dad in England who he has not seen in a long time.

Hannington is ffrom Uganda and made it a point to tell his housemates of his ladies-man reputation.

Edward Muthius aka Teddy 34 years of age is from Kenya and is unemployed.

Kaone is from Botswana. Yacob Yehdego is from Ethiopia and is an Assistant Manager.

Quinn Sieber is from South Africa and is a radio presenter/DJ.

Leonel Estevoa is from Mozambique.

George Wayoe is from Ghana and unemployed.

Jeremy Ndirangu is a music and creative instructor from Kenya.

The twins from Namibia are Edward and Erastus Moongo.

This is the first time in Big Brother history to have a contestant from Ethiopia.

Viewers also got the chance to catch up with previous contestants of the show; Nigerian movie star Tuvi James, Channel O star Nonhle Thema, Tanzania actor Steven Kanumba, and South Africa’s “it-gal” Khanyi Mbau. The show featured clips from the previous winners, Cherise Makubale (first season winner), Richard (third season winner), and Ricardo Ricco Vanancio (second season winner), who all seem to be doing extremely well. Cherise shared that she is married and now resides in London, and continues to run a host of charitable programmes, while Ricco revealed that he resides in Brazil, and is currently dating, promising to introduce the lucky woman to the continent soon. Richard Bezuidenhout  shared with viewers that he and his wife are still happily married and have been blessed with a baby. He also took viewers through a tour of his newly established film company.

Previous: MTV Africa Music Awards 2009
Next: Kwesi Boakye in I Can Do Bad All By Myself