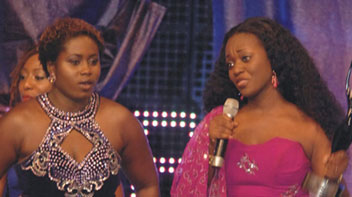 The stars of African cinema strolled down the red carpet at the African Movie Academy Awards (AMAA), the “African Oscars,” it is held annually in Nigeria.  The booming industry is also known as Nollywood.   Showcased were films that make waves globally.

The awards have helped to promote African movies overseas.

Anyiam-Osigwe told CNN, “African film has a hard time in getting recognition in most film festivals outside of Africa.”

“I think one of the biggest achievements of the AMAA is that the main festivals now look upon as a selection process, and will pick those particulars films that we’ve looked at and carry them on the different festival circuits,” said Anyiam-Osigwe.

“The first Nollywood film that the British International Film Festival showed was ‘Irapada,’by Kunle Afolayan, which won Best Indigenous Film at AMAA in 2007.  ‘The Figurine’ premiered at Rotterdam this year and has gone on to other film festivals and ‘From a Whisper’ traveled the festival circuit based on its win at AMAA.”

The 24 awards at this year’s ceremony included nominations from across the continent.

Generally Nollywood movies are low budget films, edited and released within a month.  Few end up on the big screen.  Alternatively, they are distributed as VCDs costing about $2, affordable for the mass African market.

Anyiam-Osigwe says Nollywood’s use of relatively inexpensive digital cameras instead of costly 35mm film has been its most important contribution to African cinema.

“There is a new wave of African cinema which is mostly the digital revolution, which has gone on from what Nollywood started in the early 90’s”, said Anyiam-Osigwe.

“Nigeria made people believe they could make films for less by using digital cameras.” “That has spread across the continent and I think that’s a good thing, otherwise African would not be able to have any kind of production because it couldn’t afford it”, Ayiam-Osigwe told CNN.