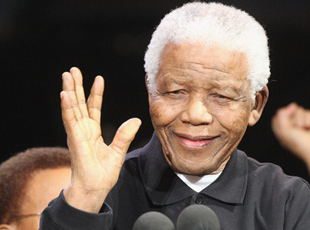 Africa’s most admired and celebrated hero Nelson Mandela just turned 91 and the well wishes came in from all over the world.  A star studded concert in New York City held on Saturday night helped celebrate Nelson Mandela and his wonderful cause.

This past Saturday, July 18th, 2009 marked a very special day in history.  It was the first ever Mandela Day that will be celebrated anually all over the world.  The day also marked Nelson Mandela’s 91st birthday.  Mandela’s doctors advised that he no longer travel internationally so he was not able to make it to the concert in NYC but his presence was definitely felt.

The tribute, held Saturday night, celebrated the anti-apartheid icon’s birthday with a diverse collection of musical collaborations that ranged from pop to disco to gospel.

France’s first lady, Carla Bruni made her American stage debut at the show paired with Eurythmics founder Dave Stewart as her husband, President Nicolas Sarkozy, sat cheering in the audience. She paid homage to Mandela’s social activism by covering Bob Dylan’s “Blowin’ in the Wind,” calling it a song by another famous activist.

African artists such as Suzanna Owiyo, Yvonne Chaka Chaka, Sipho Mabuse, and the Soweto Gospel Choir played backup for the night and were part of the one of the strongest performances.

Queen Latifah performed a booming rendition of “There’s a Light” that ended with thunderous applause. She originally recorded the song for the 2007 movie, “Hairspray.”

Among the eclectic collaborators were the Queen of Soul, Aretha Franklin, who joined Josh Groban for his “You Raise Me Up.” After the song, Groban told the crowd that performing with Franklin was “the thrill of a lifetime.”  Stevie Wonder led the star-studded finale.

Happy 91st Birthday Nelson Mandela and thank you for your inspiartion!