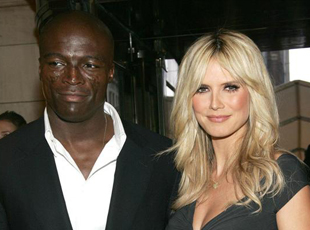 Soul singer Seal and his supermodel wife Heidi Klum will soon add a fourth child to their family.

Seal is quite a catch. He fell in love with a pregnant woman and took on the role of Daddy to her child.Â  He’s the hands on Dad women wish they had.Â  He writes romantic songs and well, he’s just all that!Â  Baby no. 4 is on the way for the Samuel/Klum household and they’re hoping for a girl.

Heidi Klum sat down with US Weekly and answered some questions.Â  On being pregnant:

Did you sense you were pregnant?

â€œYeah, I kind of knew. You feel your body change and Iâ€™ve done it three times before. Then I got the proof from the doctor and it was wonderful. Seal had the biggest smile. He said, â€˜Here we go, one more time!â€™ Because all this time, weâ€™ve said, â€˜Okay, one more and thatâ€™s it.â€™ We said that after Leni and Henry. When Johan was born, I still didnâ€™t feel like I was done. When we looked around the table, it was like one person was missing. So weâ€™ve been, you know, having fun as a couple. And thatâ€™s how No. 4 came about. But that will be it.â€

On having biracial children:

Do you talk with the kids about having a biracial family?

â€œIf being biracial ever comes up in school, then we would definitely talk about it. And I do think they see the different colors. Leni did this wonderful painting hanging in our kitchen of our family. Itâ€™s Seal, who she painted really dark. Then me, kind of white with a sparkle dress on. And she made herself exactly like me, and she has a crown on with a sparkle dress. And then is Henry, who is not as dark as Papa, so she chose a different brown pencil. And there is Johan, who has a different brown pencil. So itâ€™s not like she says, â€˜Oh, they are different,â€™ but I see that she sees it. I donâ€™t think itâ€™s a big deal.â€

Congratulations to the couple!