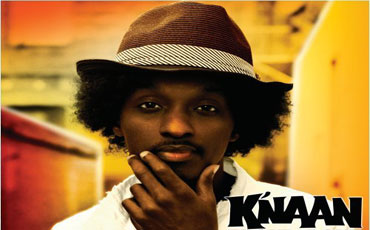 K’naan follows in Iman’s steps and puts Somalia on the map with his rapping ability.Â  His sophomore release Troubadour makes a big splash in the music world.

Kanaan Warsame left Somalia with his mother and brother to join his father in New York when he was 13.Â  The family settled in Toronto, Canada which has a large Somalian community.

K’naan gained attention in 2001 when he spoke publicly about Somalia’s plight in Geneva for the United nations.Â  He went off-script in order to critique the organization’s “Restore Hope” operation in 1992-93 (as chronicled in the film Black Hawk Down), earning a standing ovation and the appreciation of Senegalese superstar Youssou N’Dour, who invited him to appear on his album of “refugee voices,” Building Bridges, and a subsequent tour.

Â Recorded primarily in Kingston, Jamaica, at the legendary Tuff Gong studios and Bob Marley’s home studio, Troubadour is a hip-hop album like no other. With contributions by Damian Marley, Mos Def, Chubb Rock, Vernon Reid, and Adam Levine (Maroon 5), K’naan successfully blends samples and live instrumentation for a sound that’s rooted in both traditional African melodies and the classic hip-hop tradition.

Stand out tracks include “Somalia”, “I Come Prepared” featuring Damian Marley, “America” featuring Mos Def and Chali 2na (formerly of Jurassic 5), and “Fatima”.Â  Critics agree that this is not an ordinary rap album.Â  K’naan definately marches to the beat of his own drum and in this case, it works.