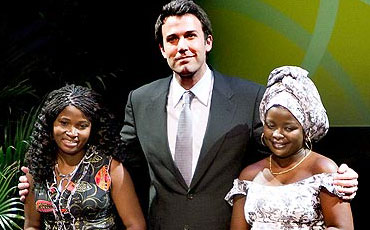 Temituokpe Esisi of Nigeria and Chouchou Namegabe Nabintu of the Democratic Republic of the Congo received 2009 Global Leadership Awards from Vital Voices.

Temituokpe Essi was a lawyer turned business owner when in 2008, she applied for and was awarded an inaugural 10,000 Women scholarship at the Pan-African University in Lagos, Nigeria. The 10,000 Women Scholarship, sponsored by Goldman Sachs in developing nations around the world, seeks to increase the number of underserved women receiving a business and management education. â€œThe first couple of weeks in class I realized I had been doing everything wrong,â€ Esisi says. Through an online mentoring program, Esisi was matched with a Goldman Sachs employee, Chief Operating Officer for the Securities division of Goldman Sachs, Michelle Pinggera, who guided her through her coursework.

Over the course of four months, Esisi excelled in her coursework, gaining the financial and leadership skills to enhance her business, and eventually completing a certificate in entrepreneurial management. Esisi now employs six people at her Lagos-based fashion company and hopes that her success will benefit and inspire women throughout Nigeria and beyond.

In the Congo, 31-year old Chouchou Namegabe Nabintu is known by many as a pioneering, fearless voice for justice and accountability.Â  In 2003 Chouchou founded the South Kivuâ€™s Association of Women Journalists (â€œAssociation des Femmes des MÃ©dias du Sud Kivuâ€ or â€œAFEMâ€) and assumed leadership of the Association as its president two years later. Chouchou has sought to perfect her technical skills by attending field trainings and searching for mentorship from experienced professionals, including foreign journalists.

With AFEM and through her radio broadcasts, Chouchou continues to shine a spotlight on womenâ€™s issues, especially in rural areas. She has also brought the plight of Congolese women to an international stage, recently traveling to the Hague in December 2007 to plead the case of Kivuâ€™s women at the International Court of Justice, where she denounced without fear the impunity in which some major rebel leaders thrive and flourish. There is no question that the world will be hearing more from Chouchou in the years to come.

These phenomenal African women shared the stage with Hillary Clinton who was presented with the Global Trailblazer Award.