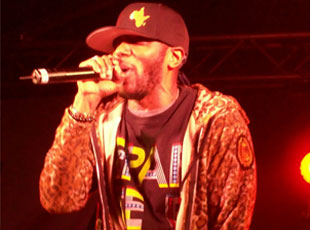 At 4 am I realized how hard it was going to be to write a review about Mos Defâ€™s performance a few hours earlier that day. What the people of South Africa had experienced was going to be hard to put into words.Â

Before he came to Johannesburg, the accomplished actor, musician and social activist was billed to perform at the Cape Town International Jazz Festival in South Africa on April 4. People traveled far and wide to see this layered, honest, eclectic and entertaining performance.Â  Accompanied by the legendary talent and genius of Robert Glasper, Chris Davis, Casey Benjamin and Derrick Hodge, collectively known as the RCDC Experiment, Mos Def shone even brighter with their impeccable musical delivery. When he stepped onto the stage an hour later than scheduled, the restless crowd was quickly forgiving. He apologized for the hour long wait, and then got on to the business at hand, the music.

Mos, who had only been in the country for a few hours, seemed genuinely overwhelmed to be in on stage in Africa, receiving the kind of love he was getting from the crowd. He held up a red, black and green flag in homage. After the first song, he truly relaxed into the rest of the set, saying â€œthis is so easy, itâ€™s so easy, so much fun!â€ as he laughed with the band. He performed old and new music, with influences from Thelonius Monk and John Coltraine to J-Dilla. When done, the crowd coaxed him back out, serenading him the same way he had done them earlier, singing â€œA love supremeâ€ all over again until his eyes misted over.

Finally, Mos Def came onstage sporting a mask and a t-shirt saying â€˜Separate But Equalâ€™. He declared â€œyouâ€™re jamming with the greatest!â€ as he appeared, and the crowd went wild. Again, his delivery was rich, diverse, emotive and entertaining. He seemed markedly more relaxed and playful. He was intent on having fun and he did. He even re-enacted the Randy Watson Sexual Chocolate scene from Coming to America! He laughed, vibed with his DJ, danced, free-styled, hugged the crowd, sang, and of course rapped. The songs were old and new. The repertoire was rich with jazz, reggae, hip hop, Brazillian, Ghanaian, soul and rock influences, and it catered for a wide cross-section of people.

The crowd responses to his performance in general were excellent. Some fans expected him to do the more radio chart-topping hits, and were a little disappointed that they did not hear all their favourite songs or play a more classically hip hop set. Mos Def was very aware of this, and he stated to the crowd, â€˜we walk on the shoulders of giantsâ€™ justifying why he chose such a varied selection of music genres from so many great artists of yesteryear.

The curtain call came way after 2 a.m. as Mos Def sang his hit song, Travelling Man. â€˜Iâ€™m leavingâ€¦â€™ he crooned, and for a good few minute after he dropped his mic, the crowd just cheered, and he took it all in. He and his two DJs did playful poses for the crowd while their photographer took pictures. Shortly after that, he left the stage to the deafening chants of â€˜Mos Defâ€™.

My friends an I hung around, reluctant to leave, but we did eventually have to roll out, sore feet, ringing ears and all, content with the moments that we had gathered of our â€˜most beautiful Boogeymanâ€™ both in Cape Town and in Johannesburg. Stomachs rumbling, we met at the fast food place and relived our favourite Mos Def moments. This was a performance that would stay with us for a long, long time to come.