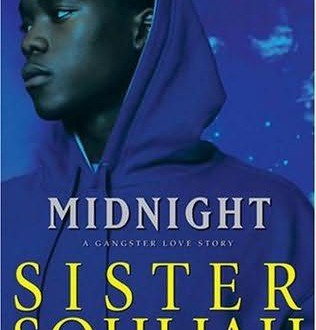 An incredible story about an African immigrant navigating through life and Brooklyn.

Sista Soulja made quite an impact a decade ago with her book, “The Coldest Winter Ever.”  It took a whole decade for her follow up story, “Midnight” to hit bookstores and fans couldn’t be happier.

“Midnight” is the story of a Sudanese family that escape to America and end up in Brooklyn.  Midnight and his pregnant mother arrive in New York when Midnight is only 7 where they are immeadiately met with America’s harsh reality of “you’re on your own” when a good friend of the family doesn’t meet them at the airport.

The family are devout muslims and are surprised by the muslims that they find in New York.  So much about this new land puzzles them but they stay true to their beliefs and culture.

“Midnight” is told from the viewpoint of a very mature young man from age 7 to 14.  It is interesting to see Midnight’s views on different races in New York, lessons learned from an African father, the strong bond between mother and son, and the true meaning of “man of the house.”

Sista Soulja is an African-American woman.  She says she wanted to desperately show the different reasons people come to America and what rich lives they come from.  Is this an accurate potrayal of an African Muslim family?

Pick up “Midnight” and let us know your thoughts.