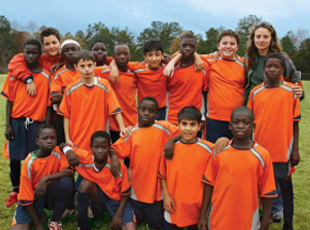 Refugees Given the Spotlight in Outcasts United

A new book gives refugees in a small town out side of Atlanta the spotlight they deserve playing the sport they love.

In the early 1980s, Clarkston, Georgia was like a lot of small southern towns – full of tightly-knit, mostly white families who had lived there for generations. Then Clarkson was designated as a refugee resettlement center.

Suddenly refugees from Sudan, Liberia, Congo and Bosnia began shopping in the supermarket and sending their kids to the local school. For the newcomers, the transition from refugee camp to small-town America wasnâ€™t easy, especially for their kids. While many began to learn English and adjust to their new home, they also struggled to forget the violence they had witnessed.

Sports became their salvation, but not everyone in Clarkston approved of the all-refugee soccer team who called themselves The Fugees. Journalist Warren St. John spent more than six months in Clarkston and wrote about the team in his new book Outcasts United.

The boys on the Fugees, while from many different countries and cultures, share this experience of being caught between worlds, and something else — a love of soccer, a game many of the boys learned to play in refugee camps, using a bundle of plastic bags and twine for a ball. The Fugees have none of the fancy cleats or embroidered soccer bags common to their competition. But their passion for the game and the bonds they form across cultural barriers help them compete against some of the leagueâ€™s best teams, even as they struggle off the field to find a sense of security and belonging in their new home.