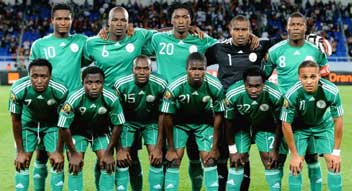 Nigeria’s football team, the Super Eagles will lodge at the Protea Waterfront Hotel after rescinding their agreement with the Hampshire Hotel.

Lars Lagerback, Nigeria’s coach dismissed the Hampshire Hotel as their base during the tournament because of its failure to adhere to critical deadlines. The Nigeria Football Federations (NFF) dispute with the Hampshire Hotel was resolved in large part because of the support they received from the Nigerian government and the International Federation of Association Football, (FIFA).

“Collectively the hotel and Nigeria have agreed to share the compensation cost following the dissolution of our agreement,” NFF president Sani Lulu Adbullahi told BBC Sport.” Earlier reports about the issue were not factual according to Adbullahi, “Contrary to what has been written all over, we considered a lot of things before settling for that hotel late last year but twice they fail to meet our deadlines to put things in place hence the cancellation.” Now that the hotel issue is over, the NFF has also finalized the Super Eagles friendly matches scheduled for the United Kingdom and South Africa.

“We will play Iceland on 26 May in London at a venue to be decided while the match against Columbia four days later will be played at the Layton Orient stadium”, NFF spokesman Ademola Olajre confirmed to the BBC. “Another friendly is also schedule for 4 June against North Korea in South Africa but will announce the ground as soon it is worked out.”
Assistant coach, Austin Eguavoen believes the return to club action for a number of Super Eagles players can fire up Nigeria’s World Cup campaign.

Super Eagles’ Captain, Joseph Yobo was in action against Stoke City on Saturday, the defender first start for Everton since their Europa League defeat at Sporting Lisbon in February. “We need all our players back in regular action and we have been worried about Yobo, but it was good to see him back in a more assuring manner,”  Eguavoen reported to the BBC. Nigeria will play Argentina, Greece, and South Korea in Group B of the World Cup.