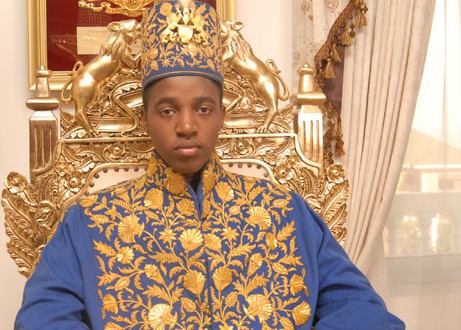 King Oyo, the world’s youngest reigning monarch celebrated his 18th.  He ascended to the throne at age 3 after his father died in 1995.

The King said “the first few years, I did not know what was going on. I think I realized when I was about 6 that I really was king, and my life was going to be different. I was going to have responsibilities toward a lot of people.”

Prior to his 18th birthday, kingdom officials had appointed a board of advisers to help him rule.

To mark his birthday, the board was disbanded. King Oyo can now make major kingdom decisions without consulting with his advisers.

According to CNN, King Oyo has overseen a Cabinet that includes a prime minister, board of regents and councilmen.

King Oyo rules over about 2 million people in the largely impoverished Tooro kingdom.

For his coming of age, his subjects gave him a spear-a symbol of his role as their protector.  His mother, Queen Best Kemigisa, gave him a Mercedes Benz.

Turning 18 is “a huge responsibility, the king said earlier this year. “But I have a lot of support from my mother, my sister and others, so I know can do it.”

His birthday festivities included a church service with leaders of various denominations and an address where he pledged to help the youth in his largely uneducated kingdom.

“He needs to use this opportunity to help us help ourselves,” said Sarah Namara, 25.  “He has a lot of work to do especially in ensuring people our age have businesses opportunities.”

King Oyo encourages residents to work hard to attain self-sufficiency using the kingdom’s rich agriculture history.  The lush region has rich brown soil and is a major source of bananas and other agricultural products.

2010-05-24
+palavahut
Previous: Osi Umenyiora Gets His Model On
Next: Right to Dream Academy