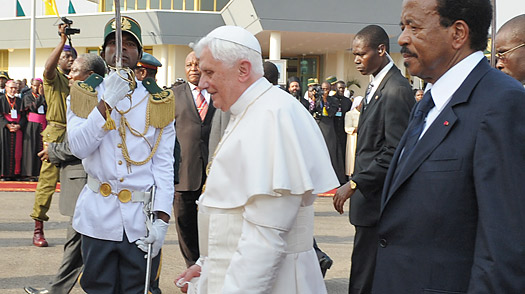 Pope In Africa: Abstinence Not Condoms To Fight HIV/AIDS

Pope tells the people of Cameroon that handing out condoms is not the answer in the fight against HIV/AIDS.

The Pope is in Africa visiting Cameroon and Angola this week.Â  Thousands of Catholics are expected to attend open-air masses.

2007 UN figures show that 22 million Africans are infected with HIV especially in the sub-Saharan region.Â  This startling figure amounts to almost two-thirds of the global total.

The Pope preaches abstinence and fidelity and says handing out condoms only increases the problem.

“A Christian can never remain silent,” he said, after being greeted on arrival in Cameroon by President Paul Biya.

The solution lay, he said, in a “spiritual and human awakening” and “friendship for those who suffer”.

Speaking at the airport in Cameroon’s capital, Yaounde, the Pope called on Christians to speak up in the face of violence, poverty, hunger, corruption and abuse of power.

While in Africa, the pontiff is expected to talk to young people about the Aids epidemic and explain to them why the Catholic Church recommends sexual abstinence as the best way to prevent the spread of the disease.