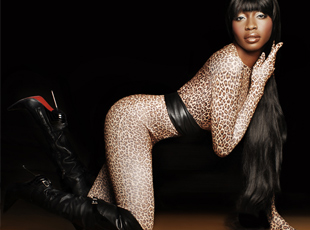 Born in Brooklyn, New York Tinu spent most of her formative years in Nigeria, West Africa where her parents raised their children according to strong family and cultural traditions. Tinu became deeply committed to her heritage and imbued with its vivid colors, uplifting energy, sounds and powerful rhythms that continue to influence every facet of her life and art. The beautifully crafted and bejeweled â€œTinu Shoebag (R)â€ has been worn at the Academy Awards and successfully sold throughout numerous high-end boutiques worldwide.Â  Tinuâ€™s exquisite beauty and sense of style have been noted by Essence and Vogue Magazine while Bill Cunningham regularly features her in the social pages of the New York Times.Â Â

Tinu nurtures a deep love for music that provides a further outlet for her artistry. Her voice has an unabashed sensuous quality that excites, woes and seduces.Â  Her debut album Rhythm of Love was an instant success in 2003, debuting the Billboard R&B charts and capturing the hearts of a broad and loyal fan base in the United States, Europe and Africa. Tinuâ€™s sonic art is her own but she readily acknowledges the influence of such great musicians as Grace Jones, Nina Simone and George Michael â€œwho gets into my head when I dance and just makes me think about anything and everything erotic.â€Â  Like Tinu, her music refuses to be pigeonholed or typecast into a single genre.Â  This is exemplified on her latest sophomore project Addicted, inspired by “those things I just cannot live without such as are love, sex, dancing and of course, shoes – what’s a girl to do?!”. Tinuâ€™s music is a richly woven tapestry that is raw in sensuality, electrifying and exuberant. It beats to a drum that is older than antiquity but newer than today, making the music a timeless collection of hits.

Addicted is an eclectic anthology of tracks, each song unique with rock, pop, funk, and soul induced vibes. While many contemporary female vocalists turn to the help of ghostwriters Tinu chose to compose the lyrics on her own so listeners inherit a direct look into the singerâ€™s laid-back sense of humor and insightful world views. â€œThe album is about my main addictions which are love, sex, dancing and of course, shoes – what is a girl to do?!.â€Â  Tinu explains that the lyrics came to her without warning allowing her to express unadulterated feelings straight from the heart. She describes the warm glow of her man on the sensual track â€œIn Loveâ€ then flips it to the bling of a new pair of shoes which inspired â€œShoeholic,â€ a song she says â€œevery girl can relate to.â€â€œNot the Devil,â€ a song that urges others not to judge, written after a fraught conversation with a close family member while the eccentric single â€œWild Thingsâ€ encourages fans to enjoy life without drug use much like Carrie Bradshaw, Tinu often finds herself strolling the streets of Soho and Tribeca picking up the latest pair of Manolo Blahniks, Christian Louboutin, Guiseppe Zanotti, and in Europe Gianmarco Lorenzi to name a few. Tinu manifests some hostility in .Tinuâ€™s music is a richly woven tapestry that is raw in sensuality, electrifying and exuberant. It beats to a drum that is older than antiquity but newer than today, making the music a timeless collection of hits.

Listen to the album and keep up with Tinu at her website.