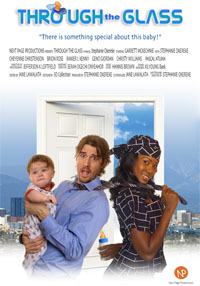 Nollywood actress Stephanie Okereke overcame a terrible accident and divorce to write, star, and direct a new movie, Through The Glass.

In 2005 Stephanie Okereke was involved in a terrible car accident that left her with burns and a broken leg.Â  Her divorce became a verbal battle of “he said, she said” that would have left anyone defeated.Â  But Stephanie came back strong with her directorial debut, Through The Glass.

Jeffrey lives the ultimate bachelor’s life going through numerous non-committed relationships, but struggles to excel at work and gain his father’s love and acceptance. Jeffrey’s life gets even more intriguing when life deals him a card that stops him in his tracks. On a typical day, he returns from work to find a note “take care of your responsibility” left on top of a baby who is abandoned on his doorstep. In nothing short of what is scary, confusing and comedic, he turns to his Nigerian neighbor, Ada [Stephanie Okereke] who he has a secret crush on, to help him. What happens to the baby? Will Jeffrey break through the glass of his phobia for commitment and keep the baby? Will Jeffrey confess his secret crush on Ada?