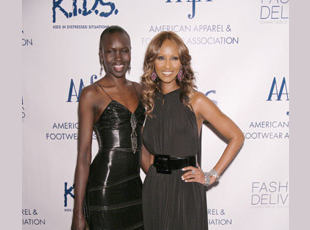 Supermodels Iman and Alek Wek have been named among the sexiest black women alive by TV One.

TV One has come up with their list of the “16 Sexiest Black Women Alive”. It comes as no surprise that Halle Berry tops the list.Â  It also comes as no surprise that flawless Iman comes in at number 9 and Alek Wek at number 16.Â  The women selected as our 16 sexiest black women arenâ€™t just pretty faces. Each one of them is uniquely talented, strong-minded and self-assured,â€ said Monique Chenault, Senior Producer, â€œTV One Access.â€ â€œNow what could be sexier than that?â€

Check out the full list, even our First Lady makes the cut: