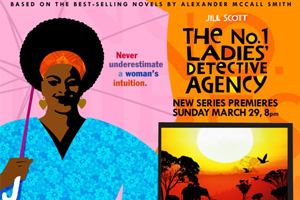 The No.1 Ladies’ Detective Agency

Jill Scott leads an African cast in this HBO series based on the best selling book by Nathan McCall.

The popular book series, “The No. 1 Ladies’ Detective Agency” has been turned into a television series starring Jill Scott as Precious Ramotswe, the first woman to open a detective agency.Â  She not only solves crimes but also gives advice.

Filming took place in Botswana and created many jobs there. Most of the cast are from Botswana as well as the crew.Â  Lucian Msamati, Desmond Dube, Tumisho Masha, Anika Noni Rose, and Idris Elba also star in the series.

The mini series already aired in the UK to great reviews.  It will premiere in the U.S. on HBO on March 29 at 8 PM.