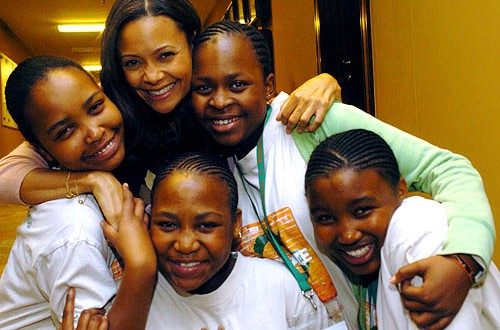 The girls at Oprah Winfrey’s Leadership Academy for Girls were treated to acting classes by British actress Thandie Newton and learnt about art and design from Greg Lauren, nephew of American fashion designer Ralph at the Arts Festival held on Friday June 19th.

Newton said she was inspired by the talent and enthusiasm of the girls. Their tenacity, their enthusiasm, their ability has just surpassed all of my expectations, I have had an amazing time, she said.

During the week’s festivities, the girls got a chance to show their rhythm in rap classes with a popular South African musician and learnt the art of storytelling from the legendary African storyteller Gcina Mhlope.

In the finale of Friday’s ceremony, the audience cheered when a group of girls donned Wellington boots for a raucous performance of gumboot dancing. Gumboot dancing where performers rhythmically slap and stamp their feet is a form of dance made popular by workers at South Africa’s many mines.

The theme of this year’s festival was about creating a greater awareness of the environment through recyclable art.

You have to learn to start taking care of the world and I think thatâ€™s really the greater message that will come from this, said Winfrey, casually dressed in a white linen trouser suit and beige shawl, her hair loose.