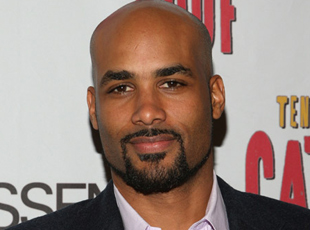 Ladies love to see Boris on the big screen or anywhere for that matter.Â  He has a movie coming out this fall and is currently shooting another.

Boris Kodjoe’s new movie Surrogates will hit the big screen this fall.Â Â  The story is set in the near future, where humans live in isolation and interact vicariously through surrogate robots who are better-looking versions of themselves. The movie centers on a cop who, through his surrogate, investigates the murders of othersâ€™ surrogates. The cop is forced to venture from his own home for the first time in years and unravels a conspiracy.

Boris is currently filming The Confidante in LA.Â  The Confidant is a tantalizing suspense thriller, written and directed by award winning writer Alton Glass. The movie is an intricately woven tale about two childhood best friends that have an unusually strong bond, and an even more intriguing secret.

The storyline includes both Boris Kodjoe and David Bannerâ€™s characters each being on a path to promising futures, one as a first round NFL draft pick, and the other a talented artist. A complicated web of lies, gambling, murder, and a pact between friends, sends one to prison and the other to fame. After eleven years locked away, the innocent of the two (Banner) comes to collect on the debt, and is determined to have the life that was taken away from himâ€¦by any means necessary!

Watch the trailer for Surrogates: