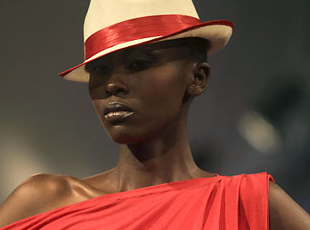 The first Fashion for Peace show was held last year in response to violence following the Dec. 27, 2007, elections in Kenya. Sadly, more than 1,000 Kenyans were killed and hundreds of thousands driven from their homes in the aftermath of the vote. Much of the fighting, like the voting, was along ethnic lines.

Until the end of 2007, Kenya was considered one of Africa’s most peaceful countries.Â  The violence that erupted surprised many.Â  The 2009 Fashion For Peace event focused on promoting Kenyan fashion beyond the country’s borders than on a clarion call for peace.

The high-end outfits stayed well above the purchasing power of the average Kenyan. Lara Mastropasqua, one of the organizers, said the fashion was more meant for international consumption. “That’s what we were showcasing on the catwalk, just because we are trying to grab people’s attention,” she said.
Ms. Mastropasqua said that establishing a fashion industry in Kenya could create local jobs that would service the global fashion market. “From the textile workers, to the women who bead, to the small cottage industry people who have amazing craftsmanship, if Africans were to reinvest in their culture, there could actually be an entire industry that could develop,” she said.

According to Ms. Mastropasqua, African access to the Western fashion world remains limited. “You will rarely have an African designer have the opportunity to show his or her talent internationally,” she said.Â  Ms. Mastropasqua said big-label designers draw inspiration from Africa without giving the continent credit.

For now, high-end fashion remains a luxury in the developing nation. Diana Libiso, a television producer who attended the show, said that price will always keep Kenyans away from designer clothes. “Your typical, average Kenyan would not spend above 25 dollars on an outfit,” she said.