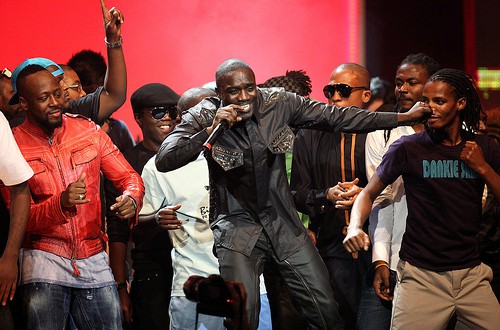 Among the highlights of the 2009 MTV Africa Music Awards were a music and dance faceoff between Kenyan divas Wahu and Amani, an extraordinary mash up between alternative rockers Zebra & Giraffe and South African hip hop icon Da LES, a haunting version of Akon’s ‘Beautiful’, and the electrifying finale featuring all the artists singing together on Michael Jackson’s ‘Wanna Be Starting Something’.

From the moment he roared into the Kasarani on a tricked up a pimped-up neon-lit Matatu to the astonishing tickertape finale, MAMA host Wyclef Jean held the audience in the palm of his hand.  Not content with hosting a complex 3-hour show and performing some of his most well known hits Jean also found time to enter into a macho push-up test with Akon, indulge in banter with Kenyan supermodel Ajuma Nasenyana and perform a somersault stage dive into the audience.

Wyclef’s opening number was a touching tribute to MAMA Legend Award winner Lucky Dube by Wyclef, Nameless and Samini, in honour of the iconic South African reggae star tragically killed in 2007.  The ‘One Time’ star also called attention to the plight of the 17 million people in East Africa affected by drought and famine.

The winners of the MTV Africa Music Awards with Zain 2009 are: