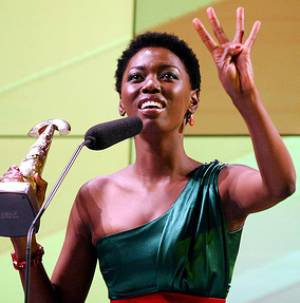 On May 2nd, 2009, the 15th annual South African Music Awards were back in town. This year, the awards had all the makings of great television; drama, beautifully dressed people, one or two prima donnas, a catfight, music, sadness, nostalgia and lots of laughter.

The night was a glamorous one, and most of the guests made the effort to look elegant, with a lot of local designers showcasing their work. Those whose clothing was considered below par and were unfortunate enough to be seen by the show’s host, comedian Trevor Noah, endured a good-natured but public ribbing.

Noah, who is known on South African screens for his quick and razor sharp wit, had no shortage of subjects for his material, and he kept the audiences laughing through out the event.

The ceremony kicked off with an eclectic collaboration of some of South Africa’s finest: jazz artiste Zamajobe, house DJs Goldfish and maskandi musician/poet Bhekhumuzi Luthuli. They paid homage to the late legendary musical giant, Mama Miriam Makeba, who passed away last year. Pretty soon, the festivities, which were themed around cultural and musical collaboration, were underway.

Noah, a fitting host considering the theme of the event, regaled the audience with side-splittingly humorous stories of growing up as a biracial child in both a white and a black household.

The event celebrated and honoured new, young and old musicians alike, with awards ranging traditional gospel (for which Rebecca Malope won an award – again) and maskandi music to jazz, dance, hip hop and Afrikaans pop. Yvonne Chaka Chaka walked away with a Lifetime Achievement Award, along with her Afrikaans counterpart Anton Goosen, with whom she performed a medley of their classics.

Young artists were not to be outdone as they performed local hip hop, rock, afro pop, house and kwaito to loudly appreciative audiences.

The evening would not have been complete without some eccentric behaviour though. Kwaito artist Bricks took the honours when he went up to receive the award for Best Kwaito Album for his aptly named album, Stop Nonsense. He appeared to be inebriated and while waving the award in the air, threw out a dig at his former producer saying “You lost, but I love you!”

Other than a few of those outbursts and one or two technical glitches, the evening was celebratory of the landscape of SA music, encouraging the young and new, honouring and celebrating the old and legendary, mourning the departed.

It was a stunning evening and unforgettable indeed.