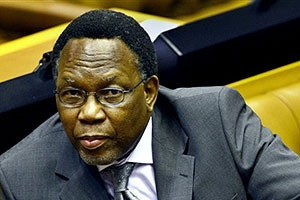 Following the dramatic axing of South African President Thabo Mbeki at the weekend, Deputy Minister of Finance Jabu Moleketi â€” who also heads the LOC’s finance and procurement committee â€” was one of 14 ministers who tendered their resignations.

The LOC will call an urgent meeting next week to determine how the country’s new Cabinet will affect preparations for the tournament.

LOC Chairman Irvin Khoza said the committee was discussing the situation with the various ministries. He added that the LOC would seek assurances that the departure of officials who have been driving World Cup projects will not destabilise the country’s preparations.

Nevertheless, it is likely that FIFA president Sepp Blatter and the rest of global football governing body is concerned about the current turmoil in South African politics â€” and the fact that the Jacob Zuma corruption trial may be heard in 2010 only.

As the International Herald Tribune this week noted: “For Blatter, who could eat a head of state for breakfast every day of the week, the diplomacy required to steer South Africa through a such a mammoth global event less than two years down the road is tricky.”

And, for the second time this year, he met privately with Zuma. South Africa is not the first host of a mega-sporting event facing major political challenges.

Nevertheless, South Africa’s ruling party would do well to get its house in order to ensure that the country is as stable as it was when it was awarded the rights to host the event four years ago.

# Has the political turmoil dented South Africa’s image ahead of the 2010 World Cup? Leave a comment below! Email Craig at sport@metropolis.co.za with all your comments.

# ‘Inside 2010’ will appear weekly on iafrica.com, so log on next week for more inside info ahead of SA’s biggest tournament to date.

# Urquhart is a former FIFA World Cup Media Officer and the current editor of Project2010.