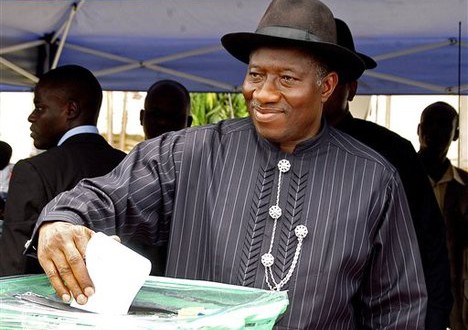 Jonathan, 64, beat his main rival Muhammadu Buhari of the Congress for Progressive Change (CPC) by a wide margin, with Bukhari capturing only 30 per cent of the vote, the country’s Independent National Electoral Commission (INEC) said.

While Buhari (59) won only in 10 states, all in the northern region. Jonathan – a Christian from the oil-producing Niger Delta – was the clear front-runner among several candidates going into the race. His main opponent Buhari, a former military ruler, is from the Muslim north. Jonathan came to power last year when his predecessor died in office following a lengthy illness. The former governor of southern Bayelsa state was born to a family of canoe makers in the riverine town of Otuoke situated in the oil-rich Niger Delta region of Nigeria.

He is the first president to come from the Southern minority group that has been agitating for resource control since petroleum exploration started in the early seventies. Nigerians turned out in large numbers at polling centres across the country Saturday in what they hoped will be the first credible presidential election for decades in Africa’s most populous nation. There was no sign of the chaos and violence that has dogged past elections although two bombs panicked voters in the troubled northeastern city of Maiduguri. There were no reports of casualties. Jonathan will be sworn-in on May 29 to serve a four-year tenure after which he is free to go for a second term. African Union observer and former President of Ghana John Kuffuor said the election was free and fair but cumbersome.

Nigeria with a population of 150 million is divided between a largely Muslim North and mostly Christian South. The oil-rich country returned to democratic system in 1999 after several years of military rule. It has conducted elections every four years since then. It is the third time general elections are being held in Nigeria since military rule ended. The previous ones – in 2003 and 2007 – were marred by allegations of widespread rigging, voter intimidation and ballot vote snatching.

Previous: Fuck Everything
Next: Big Brother Amplified with MNET and Coca Cola Partnership