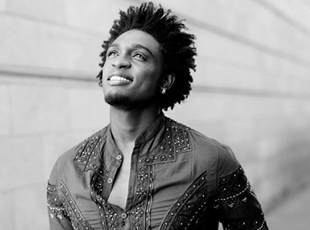 Corneille Nyungura was born in Fribourg, Germany, where his Rwandan parents were students.Â  As a boy, Corneille began to develop an interest in musicâ€”initially discovering Michael Jackson and then the great soul artists who would shape his style: Stevie Wonder, Marvin Gaye, Sam Cooke, Prince.

The Rwandan genocide in 1994 changed everything for Corneille and his family.Â  Corneilleâ€™s parents and other family members were killed in the massacre. He alone managed to escapeâ€”first to Kinshasa, and then to Germany, where he was taken in by some family friends.

Corneille stayed in Germany for three years before moving to MontrÃ©alâ€”part of the North American world that had shaped his musical dreams, but still familiar for its French language. He attended Concordia College, but decided that it was time for him to get serious about his music. He formed a band called O.N.E. (Original New Element), and, in 2002, released his first studio album, Parce Qu’on Vient de Loin.

Following its success overseas, the album was reâ€“released in Canada, and took off behind the single â€œRÃªves de Star,â€ eventually achieving Platinum sales status. Corneille received his first Felix Award, selected by the public, for Best Male Artist. In France, sales of Parce Qu’on Vient de Loin soared past a million.

In 2005, Corneille recorded a song with Senegalese superstar Youssou N’Dour in support of UNICEF and the fight against AIDS. That same year, his second studio album, Les Marchands de RÃªves, was released. A sixtyâ€“date tour of France had a total attendance of over 200,000 fans, and was followed by an acoustic tour in the fall of 2006.

But Corneille wasnâ€™t fully satisfied by his triumphs in Europe and Africa. â€œI was starting to feel lost,â€ he says. â€œWith my French albums, I was becoming a symbol for something, a persona, more than an individual. I needed to break from thatâ€”and it doesnâ€™t get any more humbling than coming to the U.S., because you really do have to start from scratch.â€

Corneille began working on the songs that would become The Birth of Cornelius album. As he got closer to the tradition and culture that first drew him to music, his acousticâ€“based R&B sound began to come fully into its own. â€œWhen I allowed myself to write in English, everything was different,â€ he says. â€œI came up with some of the songs in five, ten minutes, because it was just pouring out. I guess I was reconnecting with the way I saw and understood music when I was little, and that was an amazing experience for me.â€

After all this time, after all these travels and tragedies, Corneille and his music are finally ready to take on America. And he canâ€™t wait.

â€œI look at America, and I see so much of who I am,â€ he says. â€œThe identity confusion that Iâ€™ve been struggling with all my life is the same that most people here go through. When I think of America, the first thing that comes to my mind is the sense that I might truly feel understood for the first time.â€

Â The Birth of Cornelius was released in March.Â