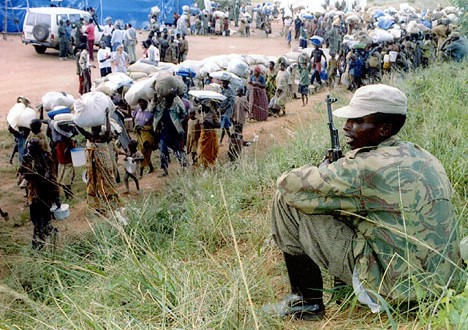 It is hard to believe that it has been 15 years since Africa’s largest genocide in Rwanda occurred.Â  It is even sadder to think had Hollywood not made 2 movies; Sometimes in April starring Idris Elba, Oris Erhuero and Debra Winger and Hotel Rwanda starring Don Cheadle and Sophie Okenedo, the horrific events of 1994 may still not be known by some.Â

President Kagame, among others, lit a candle in memory of those who perished during the 1994 genocide, which claimed according to the UN, lives of about 800,000 mostly ethnic Tutsis and moderate Hutus.

The President was accompanied in the candle-lighting ceremony by a 15-year old Alice Ishimwi, whose parents were killed during the April-July slaughter, one of the worst humanitarian tragedies of the 21st century.

The site of this year’s commemoration was also historic. During onslaught of the 1994 killings, thousands of refugees sought shelter at the United Nations Peace Keeping Force (UNAMIR) at the Technical School (ETO) near Nyanza-Kicukiro, hoping to get protection from the blue helmets but to their dismay the peace keepers abandoned them and were subsequently killed by notorious Interehamwe militias and rampaging soldiers from the former Rwandan Armed forces (Ex-FAR).

Members of diplomatic corps, government officials and invited guests will also witness decent re-burial of genocide victims and lying of wreath. During the occasion some testimonies of survivors and witnesses of ETO Kicukiro killings were heard.

As part of commemoration, several activities linked to the event have been going on since last week-end, including a launch of world-wide “One Dollar Campaign” for the orphans of genocide, by Minister for Foreign Affairs, Rose Mary Museminari.

Some $ 52,600, including cash and pledges, have so far been collected from local and international well wishers. The “One Dollar” campaign has been engineered by Rwandans living in Diaspora.

The proceeds will go to build a hostel for children who survived the genocide. The fund-raising campaign will last for 100 days.

The Executive Secretary of Genocide Survivors Association (IBUKA), Bonoit Kaboyi, whose office is located at Nyanza-Kicukiro, said there was some light at the end of the tunnel, 15 years after genocide.

He said the fact that suspects confessed publicly and asked for forgiveness during gacaca (traditional courts) proceedings has helped to reconcile the perpetrators and survivors, some of whom could not speak to each other previously.

A group of local artists and some from the East African Community also performed during the 15th commemoration of the Genocide against the Tutsi.Â

Healing messages through their music will also be passed on to the genocide survivors and to the entire community of Rwandans. This high level artistic collaboration comes at the right time when Rwanda was officially registered as a member to the East African Community (EAC), thus bringing all member States to jointly act to avoid the genocide ideology, and to create a peaceful community.

Rwanda will be joined by different countries in the ceremony that will officially take place in Gicukiro district, Kigali.

In an interview, Samputu told The New Times that he was contacted by Joseph Mushoma, a prominent local businessman, to compose a song for the 15th anniversary of the 1994 Rwandan genocide against the Tutsi.

“This was my greatest opportunity,” Samputu says. “That’s when I though of the word: [Never Again], because I always sing about unity and reconciliation.”

Samputu says that the song was later presented to the Executive Secretary of the Commission that fights against Genocide Jean de Dieu. It was approved, and a group of local and regional artistes were contacted to join in the performance.

The song is composed in Kinyanrwanda, but its choruses are composed in different languages: English, French, Swahili, Kirundi and Kiganda, in order to give it a popular appeal.

A group of talented male and female musicians are already in the country, busy preparing themselves for the eve of the 15th anniversary of the commemoration week.

Rwanda’s famed traditional blues singer Intore Masamba said, “In my philosophy as an artiste, I believe the song will help to heal the wounds of the genocide survivors, and to create hope to the entire Rwandan community, despite what happened.”Â Â Â Â Â