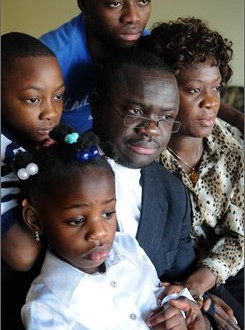 Liberians in the U.S. Won’t be Deported!

Many Liberians living in the U.S. were able to breathe a deep sigh of relief on March 20 when they learned that they would not be getting deported on March 31 thanks to President Obama.

With only 10 days to go and anxiety at an all time high, President Obama came through for about 3,600 Liberians sitting at the edge of their seats unsure of their futures.

The Department of Homeland Security and the U.S. Bureau of Citizenship and Immigration Services granted temporary protection status to Liberians after civil war broke out in the country.Â  After Ellen Johnson Sirleaf was elected Liberia’s first female president in 2006, President George W. Bush signed an order of “delayed enforced departure” in 2007 for Liberians who had been under temporary protection status, giving them 18 months to return to Liberia because of the progress in Liberia.Â  The 18 month extension was to end on March 31, 2009.

President Obama has now extended the protection for 12 more months.

This is wonderful news for those Liberians that have built lives in the U.S.Â  It is unrealistic to think that Liberians that fled their country because of war can simply return to the jobs and lives they had in Liberia before.Â  They have made lives for themselves in the U.S.Â  The next urgent step is to urge Congress to pass a law allowing for permanent U.S citizenship.