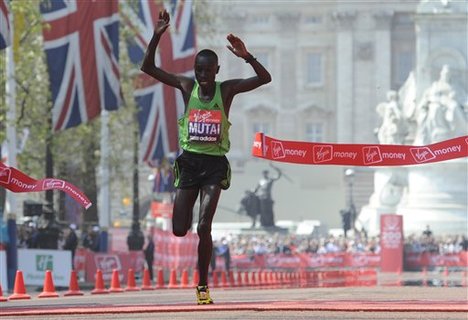 Emmanuel Mutai and Mary Keitany completed a Kenyan double as they won the men’s and women’s races at the London Marathon on Sunday.

Mutai raced to a London record of two hours four minutes and 39 seconds, while Keitany won in 2:19.19, the fourth fastest women’s marathon ever. In the men’s race Martin Lel sprinted to second place ahead of Patrick Makau as Kenyans filled the top three spots. Russian defending champion Liliya Shobukhova was the women’s runner-up. Mutai told BBC Sport: “My dreams have come true, the day has come for me. My aim was just to win the race, I was not focusing on the time. “I’m happy with the result, since I came to run in London, I was fourth twice and second once. It’s a fantastic achievement for me personally.” The 26-year-old beat the previous London Marathon record time by 30 seconds and recorded the fifth fastest time in history.