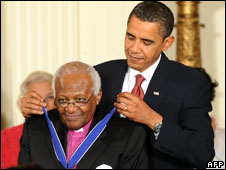 Archbishop Desmond Tutu joined good comapny last week when he was awarded the highest honor of the land, the Presidential Medal of Freedom by President Obama.  Previous recipients have included former British Prime Minister Tony Blair and former South African President Nelson Mandela.The Presidential Medal of Freedom is given to individuals who have “made an especially meritorious contribution to the security or national interests of the United States, or world peace, or cultural or other significant public or private endeavours”.

This year’s awardees were chosen for their work as agents of change.  Among their many accomplishments in fields ranging from sports and art to science and medicine to politics and public policy, these men and women have changed the world for the better.  They have blazed trails and broken down barriers.  They have discovered new theories, launched new initiatives, and opened minds to new possibilities.

Mr Obama said: “These extraordinary men and women, these agents of change, remind us that excellence is not beyond our abilities, that hope lies around the corner, and that justice can still be won in the forgotten corners of this world.”

Archbishop Desmond Tutu was a leading anti-apartheid activist in South Africa.  Widely regarded as “South Africa’s moral conscience,” he served as the General Secretary of the South African Council of Churches (SACC) from 1978 – 1985, where he led a formidable crusade in support of justice and racial reconciliation in South Africa.  He received a Nobel Peace Prize for his work through SACC in 1984.  Tutu was elected Archbishop of Cape Town in 1986, and the Chair of the South Africa Truth and Reconciliation Commission in 1995. He retired as Archbishop in 1996 and is currently Chair of the Elders.

Previous: Djimon’s Shows Off His Bundle of Joy
Next: African Beauties Represent at Miss Universe 2009