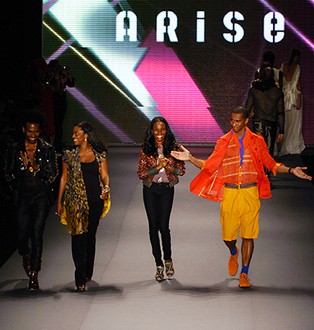 ARISE African Collective made a presence at New York Fashion Week for the second straight season. The four presenting designers included Jewel by Lisa, returning designer Tiffany Amber, Eric Raisina Haute Textures and David Tlale. Pairing Africa’s top design talent with the world’s most wanted models of color made for one of the most exciting runway events of Fashion week.

Setting the tone for the evening was Jewel by Lisa, who sent 12 models down the runway in bright Ankara prints embellished with hand beaded details, sequins, crystals, glass and fringe. The line, which was founded by Lisa Folawiyo in 2005 stormed onto the Nigerian fashion scene and has quickly become a global sensation.Taking a cue from sassy, stylish New York women-think Sarah Jessica Parker- the summer collection sees snippy shorts, slim leg pants, mini cocktail frocks and leather-mix biker jackets in a cacophony of color off-set-with batik-inspired silk prints.

Inspired by the vibrant kaleidoscopes of Nigerian artist Kolade Oshinowo, Tiffany Amber’s spring/summer 2010 collection was a festive display of flowing silk shapes the moved like a brush of wind on a breezy summery day. The label’s creator, Folake Folarin-Coker, established herself on the Nigerian fashion scene in 1998 after studying in Europe. Folarin-Coker is recognized as a leader of style and elegance both in her country and aboard.

South African designer David Tlale drew inspiration for his spring 2010 collection from the South African Ndebele tribes and the San aboriginal people of Southern Africa.  Fusing these two very different cultural aesthetics into a cohesive embodiment of Africa’s diverse heritage resulted in designs that were elaborate and spectacular, but lacked the adornments and use of accessories one would associate with the artistic identity of these tribes.

Previous: Kwesi Boakye in I Can Do Bad All By Myself
Next: Caster Semenya: The Controversy Continues