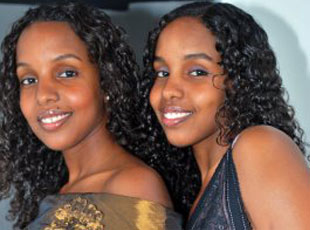 Somalian twins Ayaan and Idyl Mohallim maybe new to the fashion scene, but it won’t be long until everyone knows their name especially after getting some love from Oprah Winfrey.

These beautiful identical twins fled Somalia at the age of nine to escape the countryâ€™s civil war.Â  They were raised in Washing DC and attended college at University of Michigan and Boston University.Â  They made the bold move to Manhattan where they aimed to stand out from the rest in the world of fashion and design. Experiencing the
industry from the ground up through careful study and practice, they slowly crafted their talent, weaving their cultural influence throughout each meticulously designed piece in their studio with only distant dreams of launching a collection.

In 2008, the Mohallim sisters took their first step together, launching a new brand,Mataano (meaning â€œtwinsâ€ in Somali) and furnishing a platform to express their vision and bring forth their creations to the marketplace. Mataanoâ€™s premier Spring 2009 collection launched in New York City on November 1, 2008 featuring a boutique preview of ten dresses, many of which received notice in the industry.

Oprah Winfrey, the queen of daytime television, invited both siblings onto a recent show via Skype featuring the Olsen twins and young millionaire moguls. Paralleling their success with the Olsen sisters, Oprah lauded the duo for their inspiring story and much deserved success, and gave them the national credibility that will undoubtedly launch Mataano as an emerging brand with a rich cultural heritage.

Â Watch the ladies at work at their Spring 2009 fashion photo shoot – http://www.youtube.com/watch?v=XkMJZ1eNZq8